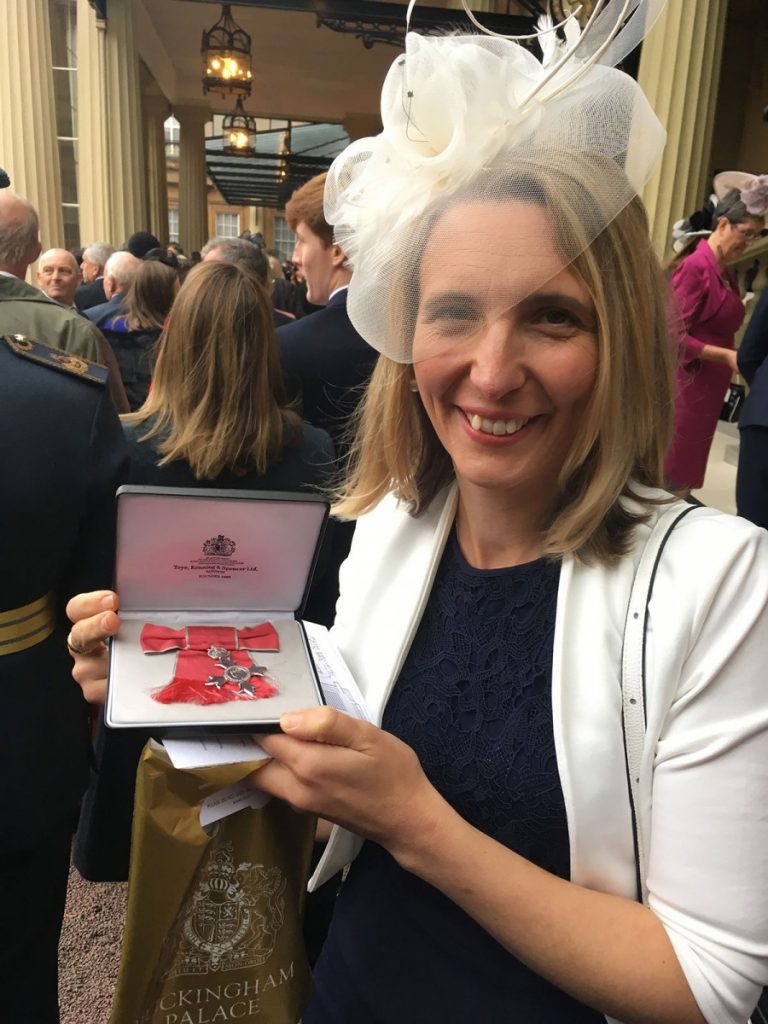 Paediatric Physiotherapist, Andrea Clarke, the founder of Playskill, (a Hertfordshire based charity running therapeutic parent and child groups for pre-school children with special physical needs), received her MBE from H.R.H Prince William in an investiture ceremony at Buckingham Palace, London.

She was delighted to walk through to the Investiture with the actress Sarah Gordy who has Down Syndrome, she received her award after Andrea from Prince William. Emma Thompson the actress was also made a Dame and 2 other people were honoured for their work with Speech and Language Therapy. Andrea went with her husband Adrian and her 2 sons Samuel and Nathan.

Andrea started Hertfordshire based charity Playskill in 2006 as a response to the needs of local children with physical difficulties.  Her work regularly brought her into contact with families who felt isolated, because their needs and the needs of their children were not understood. Having worked with a pre-school group in Northwick Park Hospital, Harrow; which included the participation of local NHS therapists, she saw a way to collectively help her young patients, their parents/ carers and siblings in a positive way.

”I have been overwhelmed and humbled by the positive response to my award,” said Andrea.  “Playskill keeps in regular touch with many of the children who have come to our sessions over the past twelve years. Parents have said that our support has not only helped their children to continue achieving their potential, but has also given them added determination to advocate on their child’s behalf.  From our point of view, seeing how the children progress into teenagers and beyond, has confirmed our ethos that that early intervention gives the best possible opportunity for children with physical/ delay or long term disability to lead enriched lives.”

“I am constantly in awe of the resilience of our families, who daily interact with overstretched, underfunded local special needs services and who face the closure of local respite care and a lack of specialist schooling as their children grow up.  The pressure on these families is enormous, and I am so pleased that Playskill can offer them positive, practical and beneficial support.” Playskill has grown from 1-5 groups due to the demand for this help in 12 years. Funders include Big Lottery and Children in Need for these groups.  A recent comment from 2018 new Garston group; “I really don’t know where else, or how I would have known even some of the basic skills without Playskill…”

“In fact, due to more demand and new funding from The Garfield Weston Foundation, we are about to officially open a sixth Playskill Group at The Lemarie Centre,  Dome group in Watford on Tuesday 13th November.  It is such a great location for our parents, as both public transport and parking (including blue badge) is plentiful and we can liaise with the other four charities that run out of the centre.  Our Playskill team, the children and their families will be able to meet our special guests, Mr Robert Voss CBE, the Lord Lieutenant of Hertfordshire and Watford Mayor Mr Peter Taylor and show them how we deliver our ‘Skills for play…Skills for life’ programme in the new Dome group. ”

“As for the future, we would like to see a Playskill group in every area, but need funding and passionate therapists to be able to take these groups all around the country.  This will enable these children to thrive, grow and take their place in the world as able contributors to society.  This award recognizes all that the Playskill team have done and continue to do, and for the amazing families and children I meet every week”.